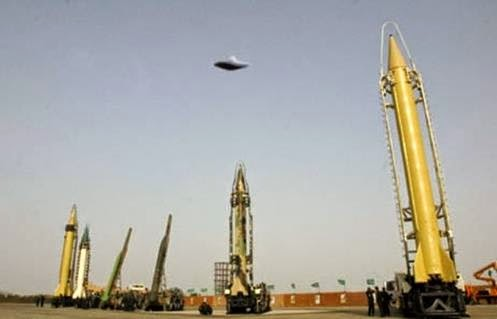 A huge cigar-shaped UFO was seen over the FE Warren military base on October 23, 2010, the same day 50 nuclear missiles were temporarily disabled.

And ‘one of the most interesting stories, with a greater number of tests, in the investigation UFO cases in recent years that have been exposed to a number of former military officers and researchers, about the alleged involvement of unidentified flying objects in neutralizing missiles. nuclear.

Investigator Robert Hastings along with Captain Robert Salas, Colonel Charles Halt and many other former soldiers, others gave their testimony at a press conference broadcast on CNN and held at the National Press Club in Washington DC.

And military investigators agree that there are several instances where UFOs have been sighted near and above military bases, including a 1967 incident at the Malmstrom nuclear military base in Montana where long-range missiles were deactivated and at the same time a UFO was sighted. parked above the base.

Do not forget the case investigated by the researcher and ufologist Massini, concerning the Marshal of VAM (Fiscal Air Force) Luigi Russo, who died recently, but witnessed the former Italian NATO encounter with a UFO base in Folgaria (Trento). Marshal Luigi Russo – says Massimo Fratini – was one of the witnesses, along with other soldiers and Carabineri, a spectacular “Productive meeting”.

It was 1976, when a flying saucer parked at the NATO base in Folgaria (Trento). At the time the base housed nuclear missiles with multiple warheads oriented towards the former Soviet Union and during the night shift, the flying saucer after pausing for many minutes at the base, it created an electromagnetic pulse that sent away the electrical current for the entire base including missile launch silos, radio transmitters, telephones and cars”.

This story goes along with what has been said for years by former American and British soldiers, witnesses that UFOs have repeatedly “disarmed” or that they have dropped missiles armed with nuclear warheads.

There is also what will provoke reactions, the recent article dell’ufologa Candida Mammoliti, published in the online journal Ticinolive.

Candida Mammoliti tells how, during a press held in the United States by the ex-USAF military, responsible for the silos of intercontinental ballistic nuclear missiles, she witnessed that UFOs several times “disarming” or that dropped atomic weapons.

The conference was actually called “UFOs and Nuclear Weapons” and it was the UFO that affected the nuclear potential of the United States, the Soviet Union, Canada, serious things in short, which we cannot afford to joke about.

The press conference was in fact to present the retired military man who had in his hands dele, literally, the fate of the world. Their wrong action, their “yes sir”, the turn of a key, and we wouldn’t be here to write about, they testify, that UFOs have repeatedly deactivated nuclear warheads under their eyes.

The press conference, which CNN broadcast major excerpts, had among its former USAF military protagonists, atomic weapons representatives who were eyewitnesses of UFOs present at military bases and their “pacifist” effects on nuclear heads.

Robert Hastings, known ufologist, has the merit of bringing former officers on camera to reiterate what 120 soldiers have served well over. UFOs flew over secret facilities equipped with nuclear missiles and they had the power to disable and left paralyzed, anti-missile defense ICBMs (Inter-Continental Ballistic Missiles) in the United States and in other countries.

Former Air Force Captain Robert Salas’ press conference, for example, the official launch at Malmstrom Air Force Base, Montana, in 1967, where they were ready for World War III ICBM ben 10, saw the same become inoperative. , the moment where the base was flown over by a mysterious bright red UFO light. Robert Jamison, a retired USAF “nuclear missile targeting officer”, testified that several times he had to “reactivate” missiles that had been mysteriously deactivated by UFOs in their passage through the military base and were seen nearby.

These testimonies from soldiers, who had top secret permissions in their careers for the positions of great responsibility and sensitivity they covered, and dozens are not confined to the United States, but across the world (often the “Soviet Union and Great Britain).

The events described by these men leave little doubt that the United States’ nuclear weapons program is a constant source of interest to “someone” who possesses far superior technology. Hastings, like Robert Salas, believes that UFOs are piloted by visitors from other parts of the universe and are interested in our long-term survival.

He argues that these beings often interfere with nuclear weapons in order to send messages to the US and Russian government to warn them of using these nuclear weapons that threaten all of humanity and the planet’s environmental integrity. Simply put, Washington and Moscow have been warned that they are “playing with fire”.

Mysterious “alien hand” washed up on beach in Brazil