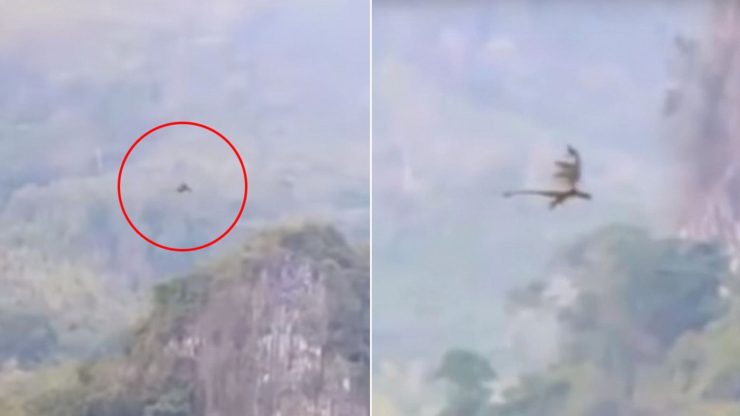 Are there cases when myths and legends turned out to be true, and not literary fiction? I guess so. In Europe, by the way, these days there is a whole institute that deals with the proof of the existence of dragons!

To be precise, they study various photographs, eyewitness accounts, mysterious cases of meetings with the inexplicable.

Dragons are dinosaurs endowed with some kind of magical properties. For example, fiery or acid breath, less often – the ability to turn a person into stone with just a glance. I think everyone believes in the existence of dinosaurs. At least, if not now, then millions of years ago for sure!

As for breathing with fire, everything is more complicated here. Hypothetically, this effect can be achieved due to the high content of bacteria in the stomach of the reptile, as well as the chemical reactions necessary for ignition.

For a creature like a dragon to exist, it would have to evolve from a different point in lobed-fin fish evolution where six of these fins became specialized and evolved into limbs instead of just four.

It’s entirely feasible that the pectoral fin AND the pelvic fin both could have stuck around and kept developing (maybe the upper set helped stabilize in the water while the lower set started walking along the bottom?)

Then you’d have a six-legged salamander-like creature taking to the land alongside its four-legged cousins. From there, it would probably follow a pretty similar line of evolution as other archosaurs, eventually letting two of those limbs specialize to be wings, giving you a traditional dragon.

There’s also a possibility that the creature would have advanced more quickly, since its four legs would allow the extra limbs to specialize more quickly and lead to quicker advancement, allowing it to learn to climb more quickly, etc. This would also explain the Dragons’ specializing in flight, since their six limbs let them learn to climb before most creatures.

So yes it’s possible, but the change would have to happen very early on it its evolution.

So, medieval legends and myths about knights fighting ancient monsters may turn out to be not a fairy tale, but a reality!

Humans are perhaps the most aggressive creatures on our planet. Every year, due to their activities, hundreds and thousands of species of flora and fauna leave our world. One can imagine that if in the Middle Ages there was an active hunt to exterminate dragons, then, naturally, they simply cannot exist today. The population has disappeared.

The last more or less reliable information about the dragons of France dates back to the 17th century. In Britain, the beginning of the 18th century. History is a lever for controlling the masses. Depending on the political structure of this or that state, this lever moves, among other things, in strictly opposite directions.

We have been witnessing such a movement over the past decades. So, it is impossible to reliably state what happened 200-300 or more years ago in Europe. Epochs, rulers changed, history was rewritten, and so on endlessly.

For a long time, researchers at the Institute for the Study of Dragons believed that if there was a chance of finding any artifacts, it would be skeletons.

However, in 2019, Chinese residents of Guizhou province began to massively talk about the appearance of a strange winged reptile in the sky. An expedition was sent to China in mid-2020.

Amazingly, it was possible to record a strange roar coming from the ground. Until now, geologists, physicists and biologists have not been able to find an explanation for this phenomenon.

It must be said that the mountainous region of Guizhou, where the dragon was seen, has hundreds of giant karst underground caves. The vaults of some of them are up to 120 meters high! In such huge cavities, their own ecosystem can be preserved.

And the roar from the bowels of the earth is nothing but the cry of a dragon that echoes through the dungeons. Some proponents of the theory about the reality of dragons believe that in China and neighboring regions, unlike Europe, dragons were revered and treated as divine creatures. Therefore, if you are looking for a mythical reptile, then it is here.

Well, perhaps, these studies are on the verge of the real world and the mythical-fabulous. As one well-known enthusiast said: “Theoretically, anything can happen, but it will be difficult for materialists to prove it.”

The paradox is that in order to prove the existence of a dragon, it must be killed. Because it would be extremely problematic to deliver such a creature to the laboratory alive.

Even though academic minds do not believe in dragons, as well as in snowmen, these relic creatures will not have to be killed for the sake of research. What do you think, can dragons exist in our world?