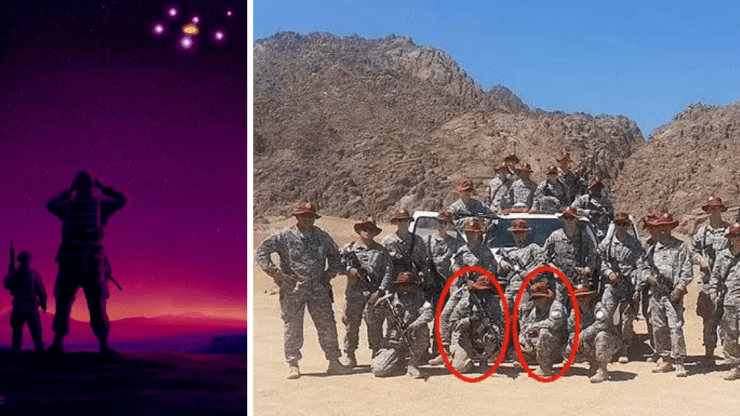 Three former cavalrymen have revealed their encounter with a UFO at a US military base in the Middle East, claiming they had no official way to report the strange sighting.

According to the British media Mail Online , they saw eight bright objects floating and traveling through the sky at incredible speeds from an outpost in the desert in Sinai, on the border with Egypt, around December 2014.

The three cavalry scouts, who are trained to identify aircraft, believe the objects they witnessed were not of human origin. One of them also claimed that a superior officer told him to “keep his mouth shut” after word spread among his regiment about the sighting.

The men said they were afraid to make official reports about the incident as they would be sent for a psychological evaluation that would harm their careers, adding that there was no proper process for making such a report anyway.

His case is an example of the worrying incursions into sensitive airspace by technologically sophisticated ships, and the inability of the military to collect data on such incidents or take them seriously – something that would be corrected with the formation of the new office.

The UFO Sighting By Military

Sergeant Travis Bingham, 36; specialist E4 Vishal Singh, 29; and Private First Class Dovell Engram, 28, were stationed at Observation Post 3-1 in Sinai, near the southern end of the Israel-Egypt border. His regiment, the 3rd Cavalry, was part of a nine-month Multinational Forces and Observer (MFO) mission deployed to guard the border.

Engram was the first to spot something strange while on watch at the watchtower one night in December. He described being “scared” after seeing what looked like a bright craft in the night sky.

The object appeared to be spinning, while smaller lights emerged from it, “spiraling like fireworks.”

He said he radioed other outposts at least 200 miles away, and they replied that they could see the lights as well.

After watching for two minutes, Engram called his sergeant, Bingham. Now living in Fort Hood, Texas, Bingham had served in Iraq and Afghanistan and thought he’d seen it all, but he wasn’t ready for something beyond this world.

“I would describe it as a large object with several smaller objects, which seemed to be communicating, or fighting, like a dog fight in the air,” he said. “We knew that it was not from our army and it was disconcerting. The objects glowed, could be seen clearly with the naked eye, and it was clear how fast they were moving.”

“To this day, I have never seen anything like that craft, covering such a distance with extreme speeds,” he added.

Singh said that after observing the craft, he focused on it using his night vision goggles. He pointed out that it was difficult to identify a shape, as the edges seemed fuzzy, but he could see roughly an oval-shaped object in a horizontal position that was the size of a jumbo jet.

“The craft and smaller objects started moving like fireflies, left to right, top to bottom,” Singh told Mail Online . “They were spinning everywhere instantly. They must have been 30,000 feet up in the sky. I can’t imagine any army that has this kind of technology. We’re talking about U-turns at hypersonic speeds.”

Although he was unable to obtain precise measurements of the speed or elevation of the objects, Singh estimated that they flew from one end of the horizon to the other in just seconds and were traveling at several thousand miles per hour.

“Suddenly, the smaller objects rejoined the craft, which then seemed to shrink further and further until it disappeared. it didn’t fly into space, it just gradually disappeared,” he recounted.

UFO Was Advance Than Anything Known

A senior member of staff at a US defense contractor with knowledge of advanced aircraft told Mail Online that he was not aware of any technology held by his army or other major armed forces that could exhibit such behavior.

“The United States, Europe and China are looking at mothership technology where an aircraft launches and retrieves swarms of drones,” said the contractor, who spoke on condition of anonymity. “However, the capabilities I am describing here do not match the description of moving like fireflies or doing high-speed U-turns. For example, the X-61A is a small UAV that weighs 1,500 pounds and is about 14 feet long. It is powered by a small turbofan and can perform small maneuvers at its top speed of Mach 0.6.”

“I don’t know what these soldiers saw, but it’s unlike anything I’ve ever seen,” he acknowledged.

The troops were Shocked and stunned by what they witnessed. They were all trained observers and familiar with all the military aircraft they could expect to see in the region.

Engram also recounted that while in his watchtower, he asked his international comrades to check with Egyptian and Israeli authorities, but that none knew what these “ships” were.

Although their mission was to observe possible military activities in the region, the three soldiers said they could not report what they had seen. “And if we could have reported the sighting, how could we have described the fuselage of the object when it had none?” he concluded.