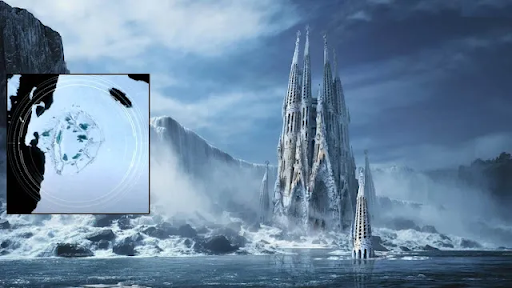 One of the most mysterious places in the world is Antarctica, due to the absence of humans, and because anomalies and strange structures are constantly being discovered, remnants of a past that we don’t take into account. A huge potentially artificial structure has been discovered in Antarctica, at first glance it can be classified as the remains of a huge building or even an ancient castle,like those in the rest of the world. Is it possible that an ancient civilization inhabited Antarctica when it was ice-free?

The evidence shows us that it is possible. Furthermore, even fossilized plants have been found, which indicates that millions of years ago, this cold place had a different type of climate, perhaps even warmer, and was a more suitable habitat for plant life, including animals, and why not? maybe even human.

A huge castle in Antarctica?

Satellite images show a structure that looks a lot like a medieval castle,or some structure in which members of an ancient civilization or even an alien species that came to Earth in the distant past could have taken refuge.

It should be noted that if it really is an artificial structure,that fact alone would cause history to be rewritten. , which would be a big problem for historians, no doubt, is why many surprising finds are not studied in depth and are left by the wayside. Unfortunately, because it’s Antarctica, independent researchers who could reveal an uncomfortable truth to the world don’t have the necessary access to investigate further than a computer with Google Earth allows. We can only see satellite images, in some cases blurred or even modified for one reason or another.

It should also be said that what you see in the images can only be the result of natural causes, left by the thaw or other unknown reasons. Some experts believe that it is just a Sastrugi , a snowy surface that has many topographic irregularities, formed by sharp and irregular grooves that are formed by wind erosion, saltation of snow particles and the deposition of fallen snow, both in the polar regions and in the tempered. .

This is not the first anomalous structure found in Antarctica, and it may not be the last. In previous years, dozens of these types of discoveries have been made. Could it be that under the thick layer of ice, many secrets of a lost civilization that existed before historical records could be hidden?