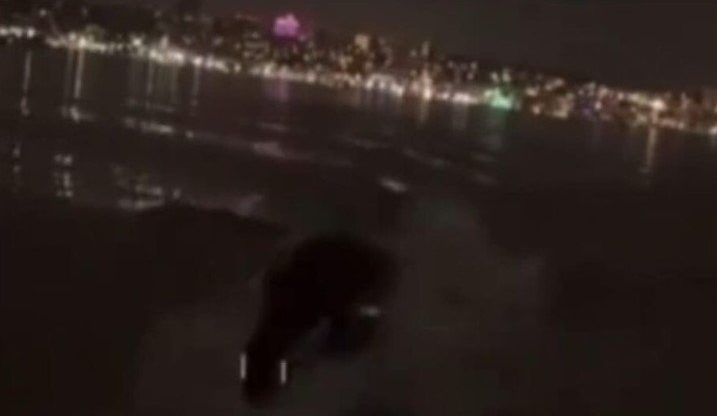 An unnamed fisherman filmed the chilling footage off the coast of Rio Grande do Sul, Brazil’s southernmost state. In the video, taken late in the evening or at night, you can see how the fisherman swims quickly on a motor boat, and some large dark-colored creature with brightly glowing eyes is chasing the boat.

The creature regularly emerges from the water, keeping up with the speed of the boat, and seems to be deliberately chasing the fisherman.

Some netizens believed that the video is a fake, and the creature was created using computer graphics. Others decided that most likely the fisherman somehow did not please the big seal.

Pedro Enrique Tunes Pereira , an expert from the National Council for Scientific and Technological Development of Brazil, believes that the fisherman was most likely being chased by a sea lion.

“Although the scene looks frightening, the man was not in danger. This strange sea creature, jumping out in the middle of the darkness, is actually a pinniped – a seal or a sea lion.

“This state is home to seven species of these animals, some of which are terrifying in size and appearance, such as the leopard seal, an animal up to 4 meters long, which can visit the region from time to time, and may have been caught on video.

Also, pinnipeds really have eyes that can glow in the dark. However, this explanation did not satisfy everyone. Some netizens found it odd that a seal or sea lion would keep up with a speeding boat, and that the creature jumped out of the water more like a dolphin than a seal.

Boris Kipriyanovich: A Russian Prodigy Who Claimed To Have Lived On Mars, Where Is He Now?