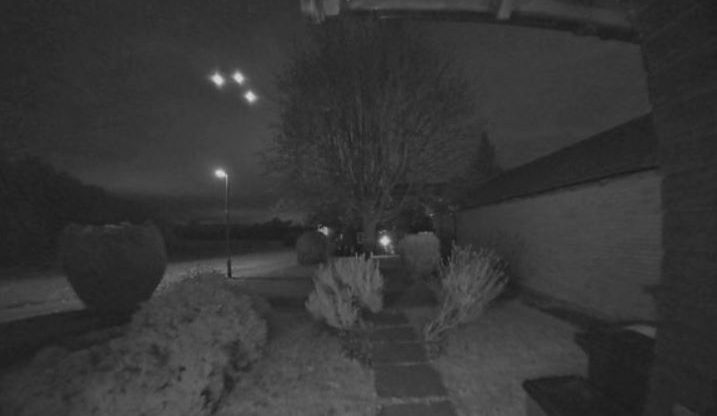 We’ve long been fascinated by the possibility of alien life. Is humanity the only species in the universe? There have always been questions asked about whether there are other intelligent beings looking up into their night sky from very different worlds.

The numerous mysterious object’ sightings throughout the years just add to the intrigue. And now, a man from Hertfordshire, England, claims that his doorbell camera captured footage of a ‘triangular UFO’ passing over his house.

Matt Doughty, 43, was watching TV with his friend Kevin Barritt last month when his phone pinged with a notification from his smart doorbell, warning something was outside his front door.

Doughty, out of curiosity or scare, played the captured footage. He was left amazed as he watched the eerie scene unfold, with an ‘unidentified flying object’ gliding through the sky with three bright lights beaming through the darkness.

“I looked at the footage and played it back,” he said.

“It was silent. Three lights came from the sky and I thought it was really weird.”

“Where it’s come through the trees, it’s come over the house opposite me then the footage captures it coming from right to left. It disappears over the top of woodland to the left of my house.”

“It was a bit of a chilling feeling really – I thought ‘oh my god, that’s quite close’. I wondered if I’d discovered something nobody knows anything about.”

“When I showed Kevin he said ‘jeez, that looks like a UFO’.”

You can see it for yourself in the video below.

Former Air Force captain: Pentagon lied that they did not know that a UFO defused nuclear missiles