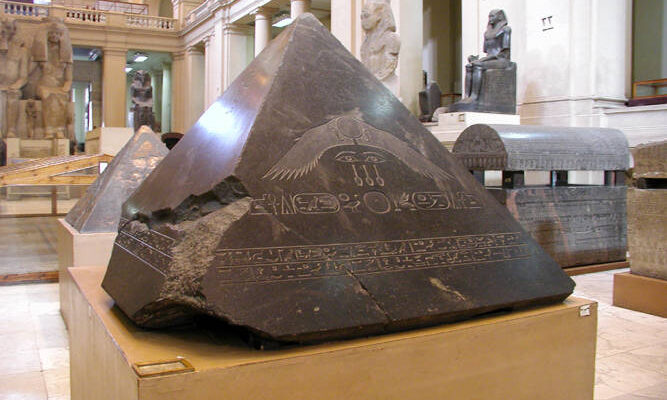 This architectural element is also known as a pyramidion (or pyramidia in its plural form). There are various tales of the creation of the world in Egyptian mythology. One of these is based on the deity Atum and originated in the city of Heliopolis.

Atum, according to this version of the creation narrative, created the cosmos. There was nothing but darkness and turmoil in the beginning. The primordial hill known as the Benben stone erupted from the dark seas, on top of which stood Atum. It has been argued that the term ‘Benben’ is related to the verb ‘weben,’ which is the Egyptian hieroglyph meaning ‘to rise,’ since the stone ascended from the primordial seas.

Another theory is that the Benben stone was the primordial hill where Atum originally landed. When the deity glanced about, he saw nothing but darkness and turmoil, and he realized he was all alone. Atum began the job of creation out of a need for companionship. According to certain versions of the narrative, Atum masturbated and so spawned Shu (the deity of air) and Tefnut (the goddess of moisture).

According to other versions of the myth, these deities were produced by Atum’s copulation with his own shadow. Shu and Tefnut left Atum on the Benben stone to build the rest of the world. After a while, Atum is reported to have been concerned about his children.

He removed his eye and dispatched it in quest of them. Shu and Tefnut returned with their father’s eye, and the god wept with delight when he saw his children. These teardrops that dropped on the Benben stone that Atum was standing on became human beings.

The Benben stone is also said to have been a sacred relic that was previously held in the ‘hwt benben,’ which translates as ‘House of the Benben.’ This precious relic was found in the deepest sanctuary of Heliopolis’ temple, where Atum previously served as its principal god.

The original cult item is claimed to have gone missing at some point in history. Despite this, it has been proposed that this was an upright stone with a rounded top based on visual evidence. It has also been pointed out that later on, other solar temples would also have their own Benben stones.

For example, the temple of Aten at El-Amarna / Akhetaten, which was erected around the 14th century B.C. by the 18th Dynasty pharaoh, Akhenaten, is said to have had its own Benben stone.

The Benben stone, in addition to being the name of a cult item, is also used to identify a sort of ancient Egyptian architectural feature. The stone was known as a ‘benbenet’ (the feminine version of ‘benben’) to the ancient Egyptians, but it is also known as a pyramidion to modern people.

This word refers to the capstone that was set either on top of a pyramid or on top of an obelisk. According to legend, in the case of the former, the pyramidion is frequently coated with electrum or gold.

Pyramidions have survived and can be found in museums. One example is the pyramidion that previously crowned Amenemhat III’s 12th Dynasty Pyramid and is now on exhibit in Cairo’s Egyptian Museum.