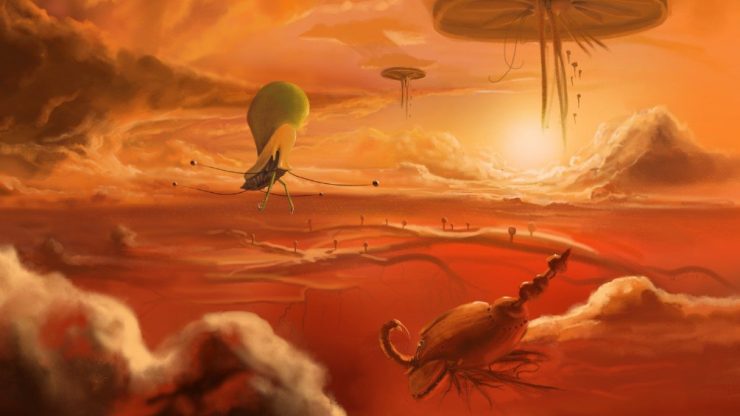 Absolutely all programs for the search for extraterrestrial life are focused on the study of exoplanets, which are similar in many respects or were once similar to Earth in the distant past.

However, physicists Louis Anchordochi and Eugene Chudnovsky of the City University of New York consider this approach irrational, depriving us of a coherent picture of the world order.

Life, in their opinion, can have completely bizarre forms and even live, for example, in the bowels of stars.

The authors of the study do not claim that highly developed alien civilizations are hiding inside the stars, but they do not exclude the possibility that “something” can live there, leaving behind offspring before it is destroyed by heat and pressure.

Undoubtedly, the study is largely speculative, but it expands the search for extraterrestrial life.

If we really want to find “brothers in mind”, then we must consider various options and admit the impossible, which does not fit in our head.

According to the hypothesis of Anchordoka and Chudnovsky, life in the interiors of stars can be based not on DNA, like life on Earth, but, for example, on monopole particles – elementary particles with one magnetic pole, which are able to quickly form massive structures and reproduce themselves.

This may well provide something like genetic mutations without the participation of DNA, which will assign new traits to offspring, perhaps even before the appearance of intelligence.

“Compared to the lifetime of a star, its lifetime is an instantaneous spark of light in the dark. What is important is that such a spark manages to produce more sparks before it fades away, thus providing a long lifespan of the species,” the researchers write.

“The complexity evolving through mutations and natural selection increases with the number of generations passed. Consequently, if lifetimes of self-replicating nuclear species are as short as lifetimes of many unstable composite nuclear objects are, they can quickly evolve toward enormous complexity.”

Hypothetically speaking, it’s perhaps possible that such a life-form could develop intelligence, and maybe even serious smarts, Chudnovsky says.

The authors of the study believe that hypothetical guests of the interior of stars should be sought inside those luminaries that cool and dim abnormally quickly.

The strange behavior of the star can be explained by the unquenchable activity of bizarre life, “feeding” on the thermonuclear energy that surrounds it.

What such a species would look like is a feast for the imagination. But we don’t have to know what they look like to search for signs of their presence.

Because such organisms would use some of the energy of their host star to survive and propagate, stars that seem to cool faster than stellar models can account for could be hosts for what the researchers call “nuclear life”.

Several such stars have been observed, and their slightly accelerated cooling is still a mystery. Stars that dim erratically without explanation could be a good place to look, too – like EPIC 249706694.

The researchers are careful to note that to link these stars to nuclear life would be an extremely long bow to draw. But there are interesting anomalies out there. And interesting possibilities too.

“The universe may be saturated with life that is so different from life on Earth that we cannot even identify its existence,” the scientists added.