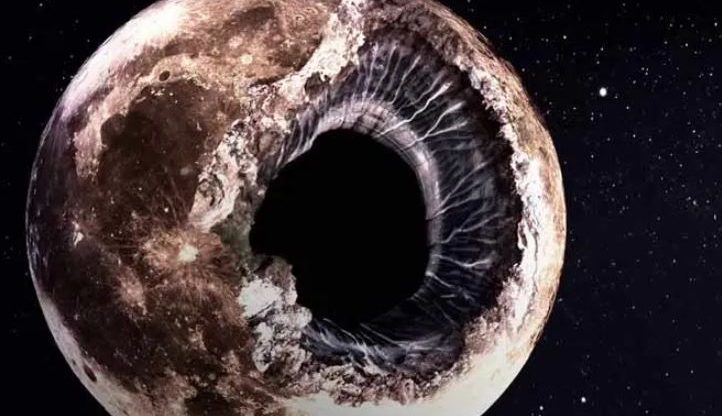 Astronomers have discovered a strange huge structure under the largest crater on the moon. This structure is located in the Aitken Basin at the South Pole of the Moon.

“Imagine taking a pile of metal five times the size of the Big Island of Hawaii and burying it underground. That’s about the mass we found,” said lead author Peter B. James, Ph.D., assistant professor of planetary geophysics at Baylor College of Arts and Sciences.

The crater, located on the far side of the Moon, is an oval region about 2,000 kilometers wide. Scientists have taken measurements for many years and have come to the conclusion that the depth of the area is several miles.

The new anomalous mass below the crater is detailed in the study “Deep Structure of the Lunar South Pole-Aitken Basin” published in the journal Geophysical Research Letters.

To detect the anomaly, astronomers analyzed data from NASA’s Grail mission, which allowed them to accurately measure changes in gravity around the moon.

“When we combined this with lunar topography data from the orbiter, we unexpectedly found a large amount of mass hundreds of miles below the South Pole – the Aitken Basin,” James said.

“One explanation for this extra mass is that the metal from the asteroid that formed this crater is embedded in the Moon’s mantle.”

Studies have shown that a dense mass of structure – “whatever it is, wherever it comes from” – makes up the entire bottom of the pool and extends down more than half a mile.

Using computer simulations of asteroid impacts on the Moon, the team of researchers found that, under the right conditions, iron-nickel asteroid cores could be dispersed into the Moon’s upper mantle during impacts.

Recent discoveries by astronomers have only raised more questions.

In 1970, two Soviet astronomers speculated that the Moon is probably hollow, and put in place by an advanced alien race. They based their theory on the many anomalies.

“The abundance of refractory elements like titanium in the surface areas is so pronounced that several geologists proposed the refractory compounds were brought to the Moon’s surface in great quantity in some unknown way. They don’t know how, but that it was done cannot be questioned,” once wrote in his book Don Wilson.

Russian Scientists Stated In 1970 That Moon Is Artificial Space Object